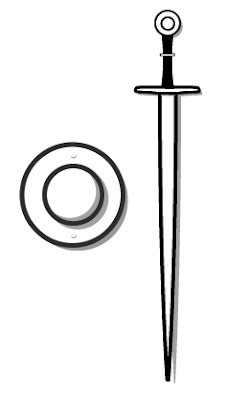 What started as whim quickly became something of a fascination. I will have to thank Google for returning London Longsword Academy to me when I typed the term “Pay as you go sword fighting, London” into the search bar. Without that query, I would never have discovered HEMA.


If I was to say that HEMA was the first stage of my interest in swordsmanship, it would be a lie. Beforehand, I took part in a 1 hour fencing taster at Centre Parcs which then gave me the bug to try a short course in sports fencing. I liked it! Although I was pretty useless in my opinion. Being a 5 foot 6 inch short-house with next no flexibility, not the best fitness, average speed and not enough lunge can prove to be a handicap when it comes to fencing - I would have to do a LOT of training. A left hand fencer would own me every time, someone who was 6 foot or taller would spear me before I could even think, I lacked the speed and technique to deal with it. I was once complimented in one bout, 'Well done, Jim! like a brawler!' ( are you supposed to be a brawler in fencing?). I won the match/round against the intermediate fencer who was the similar height to me ( I was chuffed )and after that, the beginners course came to an end. To tell the truth, I wasn't much of fencer. Maybe if I had started as a child instead of at 30 years of age it would be a different story, or had plenty of money to throw at it. So, with the notion of feeling fairly useless at sport fencing and a lack of funds to take the next course plus work-life commitments I looked elsewhere, I couldn't just stop! My interest in swordsmanship had been piqued! I needed to know if you could find an 'as and when' pay as you go class in fencing and swordsmanship and if you where to find a pay as you go sword fighting, London would be the place. That is when I found The London Longsword Academy! Since then, my curiosity of the martial and sport has only grown.

What is Historical European martial arts?
For some reason I do not really feel entitled to describe the intricacies HEMA. I'm a sporadic attendee with a shallow understanding of the theory. I feel that answer would be best left to David Rawlings or a HEMA scholar. But, In lay terms, and in my own words HEMA is the study of historical swordsmanship, wrestling, daggers and other forms of close quarter combat based between the 14th and 18th century. I have mostly focused on the Sword & Buckler.

I think it would be fair for me to say that a lot of modern day western sword based sports would have come from these historical martial. History and the evolution of war has rendered many of these skills and techniques obsolete now - Those that study HEMA want re-establish and relearn the lost art of European Swordsmanship as a discipline and a passion.

"One day... we will run out of bullets!"
- T-shirt slogan, misquoted

HEMA Isn't Sport Fencing
Just to rule this out, HEMA isn't modern sport fencing, although I would dare to say that modern sports fencing is based around HEMA. HEMA focuses on the original techniques of European swordsmanship, For example: the Sword & Buckler (swash buckling anyone?) and Longsword. Where as sport fencing focuses on the win using Sabre, foil, epee with different illegal moves etc. Both come with similarities, but both are certainly not the same thing.
Being taught under London Longsword Academy - Dave Rawlings, he emphasises that 'if you are hit, whilst hitting your opponent you have both been hit!' A car crash essentially, and car crashing into your opponent as hard and fast as you can will not score you points in HEMA. HEMA makes you consider a very aspect which doesn't appear to as high a priority compared to sports fencing - defense. In HEMA, even if you score a 'Hit' but fail the protect yourself from your opponents weapon you will have most likely sustained injury (taken a hit) yourself. In Sport Fencing - in contrast, this is not the case. A microsecond and fully extended arm will make all of the difference between winning and losing a match. You are not rewarded for poor defence in HEMA and rightly so in my opinion.

HEMA Is Open To Interpretation
The practice and theory HEMA is based on the original fighting manuals from medieval Europe. To reference one manual or system in particular - The 1.33 - which would give you some insight into how to use a Sword and Buckler. Modern techniques based around the the 1.33 appear to based around visual references called plates taken from this manual. Much of these masters references have be interpreted for modern use.

To elaborate further as to why I say the HEMA is interpreted. A lot of the moves, stances, wards etc are based around illustrations (plates) taken from the 1.33 and other counterparts between the 14th and 18th centuries. Whilst practicing HEMA, the challenge comes from trying to translate the images into body language, foot position and other stances.  A  trained HEMA instructor will guide you along the murky depths of flat images, and slightly gammy hand-drawn limbs. The plates act as keyframes from an animation. It's down to you and or the instructor to navigate your way between these positions. It can take a bit of working out but often the proof will be in the pudding and the drill will feel - correct

If you were to watch a class, you might find yourself asking “how did their foot get there?” or “How does my hand get to that position” you are left to make assumptions – educated assumptions, but assumptions non the less and i dont believe i'm being outrageous in saying that I think that even the most senior HEMA masters will have to make educated assumptions, the only trouble with this is that it open the door to debate on which is the correct technique. I guess the only 100% answer would be to talk to expert in 1.33. Another thing to ask yourself, would you put your trust in a blog post the train or put your faith in someone that that has been practicing for over 20 years? I know what I would do.

HEMA Equipment
I wish I could say that I have had a go at every class that the LLA has to offer but that would be a lie. I have worn and used : Fencing masks, gloves, nylon and steel bucklers, nylon and steel swords – Messers and side swords, plastic sickles, Indian clubs, combat knives, daggers and now I have tried my hand and rapiers and parrying daggers. The more committed martial artists also wear more advanced protective jackets and masks which can be purchased online. If you are curious for more I would advise coming to a class or finding a club near you.

Why go?Why not! It inspires my art, its good for fitness and its fun! Different people have different reasons for going. Others go to perfect their martial arts and develop an understanding of swordsmanship, there a various reasons for people to go ( I bet someone wishes they were like Jaime ). For me, it's about the focus and losing yourself in the activity. The understanding, the fanatical attention to detail, all the components which add up to make the move perfect! It's hard at times, but I love it.


Am I any good?
I'm okay, I don't go enough. If you think its just about swinging a sword around believing you're pirate you'd be sorely mistaken - very sore indeed, even if hit why a nylon.


What do I think
HEMA is great and I would recommend going! Just remember, that HEMA isn't sport fencing nor is it reenactment. My only thing I might say are human's {myself included, barely human) have a way of breaking the 'Drills'. The drills being processes in which you learn the technique. People forget key parts, do something slightly off, tire, sabotage the drill and a lot of is unconscious - you dont mean to do it! But when its done right, it looks beautiful, when its done wrong, well... you'd would have to attend to see.  I have attached some links of where you can find some HEMA schools in your area and where to buy some equipment!

I would also like to add that this post represents my opinions and not that of the LLA or other fencing schools.
Find a club :-
Find a HEMA club!

Thank you for reading, Maybe we can spar one day!

Posted by jimm's creative design blog at 13:30 No comments: